AN EVENING WITH QUINCY JONES

Probably every producer, singer and songwriter’s dream to meet the legend that is Quincy Jones; to get to co-produce an event with the man himself….wow, this was a mind blowing experience! 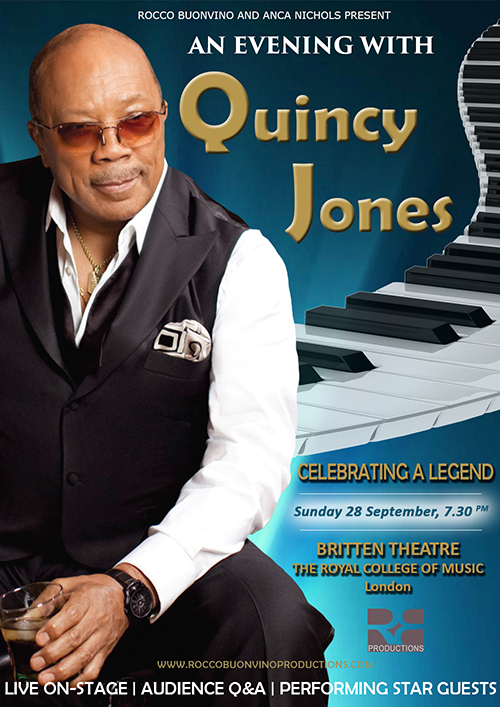 I was one of the co-producers of ‘’An Evening with Quincy Jones’’, alongside Rocco Buonvino Productions, event held in London on 28th September 2014 at the famous and intimate 400 seats Britten Theatre – Royal College of Music. A project not many would have dared to take on due to dangerously time constrains: less than a month to book, stage and sell an event.  But when a name like Mr Jones becomes available, it is difficult to say no, you just seize the opportunity and make it happen!

The event was initially scheduled as an on-stage interview with Quincy, followed by a Q&A session with the audience, but we all decided that we need something more spectacular to match the legend we have the unbelievable luck to work with.  So a band was booked alongside ten artists to provide the pre-entertainment. END_OF_DOCUMENT_TOKEN_TO_BE_REPLACED