I’m Anca Nichols, going by the name of Lady Noize. I’m a songwriter, producer and remixer based in London.

I stared out writing for myself, but working in the studio turned out to be far more exciting than being on stage. I get to control the sound, the music, the words, there’s nothing more beautiful than being able to create a song.
Perform, create, or both… that was the question, so I chose to create, at least for now.
Thanks to a wonderful community here in London called Community Music (CM Sounds), I’ve started my journey into music production. I was offered a free one year course to study music technology and production and how could you turn down such an offer? You can’t, so I went for it. One year turned into four as I went further to study advanced music production and music business and graduated from the University of Westminster with a BA (Hons) in Commercial Music.
I went for an internship with a top UK producer: Youth (aka Martin Glover – Killing Joke, The Verve, The Orb, Paul McCartney and many more, check www.youth.me.uk) and I have gained a real insight into the industry. He is such an amazingly talented and inspirational person and how often do you get the chance to be in the studio and learn from one of the best? This is priceless!

I work in my own home studio, the first thing I turn on in the morning is not the kettle, is the computer. I’m into many different genres, I listen to most music as there’s something you can learn and get inspired from everywhere.
For the past year I have been mostly doing dance music and remixes, as this is what I had requests for, so I have been remixing for various artists and had a few small releases which led to bigger projects in making.
I have started doing bootleg remixes for major artists and entering various remix competitions. Some of my bootleg remixes have gained radio air play, so great having DJs asking you for a copy to play it on their show.
My very first attempt to remix was for GeorgeMichael – True Faith. To my surprise the remix did quite well on YouTube, being featured as one of the top remixes. I did about 20 more remixes for artists such as Beyonce, Christina Aguilera, Janis Joplin, Paloma Faith, Polystyrene, Usher, Rufus Wainwright, Queen, etc and many more for new bands and mates.
All this work paid off, as I have started getting jobs and the exposure gained is priceless.

Besides remixing, I am also writing songs for the Korean and Japanese markets, collaborating with other songwriters and producers and everything looks promising.

We catch up with Anca and find out what makes her tick and why music is her life.
1) Why did you choose the UK to study and work in the music business?
I didn’t really choose UK to study and start my music career, it kind of happened. After I’ve moved here, I have slowly got into the music scene,going out to gigs a lot, making friends who were into music, DJs, producers so I got the bug myself.
Everything has come into place naturally; guess it was supposed to happen and I am glad it did as this is the perfect place to be if you do what I do. Besides the US is a bit far for me, as I travel back to Bucharest a lot. I
love the UK music scene, the history, this country has given to the world so many icons. UK is one of the world’s largest music industries and being here feels like being part of this magical, powerful entity.

2) Who has been the greatest influence in your musical life?
Growing up in Bucharest, during communism, Western music was forbidden. My brother who was Romanian champion at fencing used to travel a lot to competitions abroad and he used to smuggle vinyls in his luggage, so we ended up having a forbidden collection of Western music. I
remember we used to listen a lot of ABBA and Genesis, Michael Jackson and Queen. We used to play a Shakin’ Stevens vinyl and dance like we belonged in a nut house!
When I was 14, after the revolution in 1989, we were inundated with everything from Western countries, radios started playing everything and my first obsession with music started when someone gave me Faith – George Michael. I could not stop listening to that album, it
was so different to everything else. I used to rewind the cassette with a pencil as I had a really dodgy cassette player and played it so much that was worn-out. I never really thought in making a copy of it so it took me ages to find another one as we had no internet at the time.

3) What genres of music are closest to your heart, and why?
I listen to many genres, depending on the mood. I listen a lot to Massive Attack, Faithless, I love trip-hop. Good pop- rock music which I like making as well, dance music when I’m all wired up, jazz and soul on a night out.
I go through different genres all the time, I cannot say I like a specific genre only. I like all good music and I have to play it all the time, even at work.
4) When you are not being musical, what do you like to do for fun?
When I am not doing any music, I have another job to do, as exciting as my music: I work for a concert and events promoter. I help with everything on events like the ”An Evening with” series. This year I was involved in staging events with Sylvester Stallone and John Travolta and now I am helping on events for Al Pacino and Arnold Schwarzenegger. It is so exciting being able to meet and work with such names. My free time is quite limited but I always find the time to go see a good gig. I have just booked tickets to see ”We Will Rock You” before it closes down. My idea of fun is getting and installing plug-ins and sound libraries on my system and creating my own instruments in EXS 24 in Logic.
I am also taking piano lessons as I really want to learn to be able to play well, not just enough for programming, oh , and I want to learn how to read music!

5) Brass Bands; cool or not?
I love brass, one of the few sounds you cannot fake with a plug-in; it just has to be genuine, believe me I’ve tried, the best brass plug-in is a brass player. During my internship with Youth, he gave me the files to remix two tracks for the punk icon Polystyrene. On one of the songs called No Rockefeller, I really wanted to keep the original brass, so this was the first time remixing a house – dance track with live brass.
Brass bands are definitely cool and unique; no software will ever replace them.
I love using brass instruments. I can hear it in more and more modern productions.
All I need now is to find brass players I can work with. 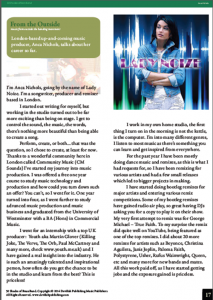 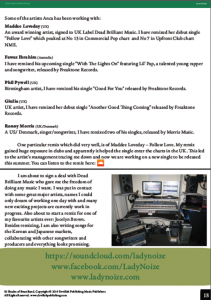 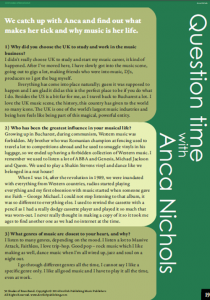 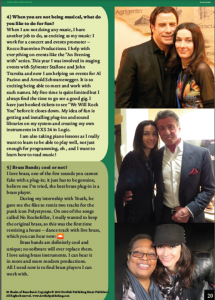